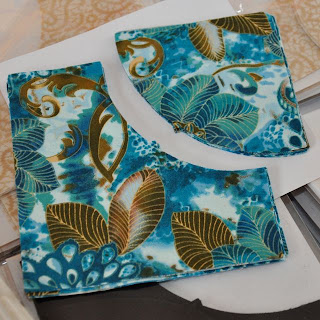 I'm a bit of a sucker for drunkard path units of late. I've made a couple of quilt tops using them now.  I have the help of my trusty Ellison die cut machine which is not so fancy as the Accuquilt but having had it over 10 years now I can tell you its very reliable. 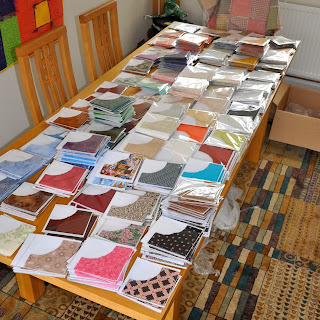 My dining room today!
I use steel dies just like the Accuquilt but I have to pull a lever rather than wind a roller. Now the slightly disturbing thing is that I have worn one of my dies out.  My poor 4.5" drunkard path die has near enough given up the ghost and its  edges are a trifle dull now. It still cuts accurately but not as easily and I now have biceps 1" bigger than a decade ago (ok it was worth a shot blaming a piece of equipment instead of the cake tin!)   Fortunately it played nicely for the thousands of pieces I have recently cut. 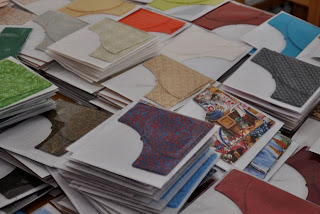 Each little packet has 8 sets of L's and Pies
(anyone know the official name for DP parts?)
I am teaching at the Quilters Guild of Ireland Conference in Dublin next month with a slightly different class offering. Yes it's a Drunkards Path class using prepared die-cut pieces! 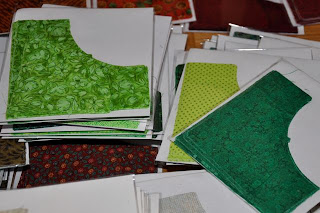 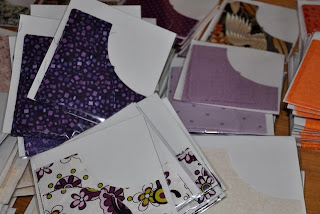 It seems this great idea of mine (said tongue in cheek) has proved very popular and I had a sell out class vey quickly. At the moment  I have 15 students with a couple on the waiting list.  I'm delighted of course but it did mean someone was going to have to cut the pieces! 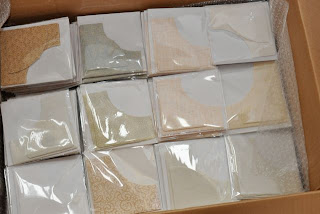 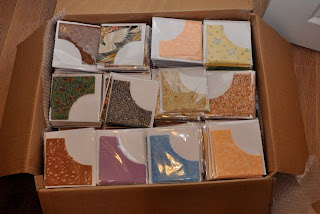 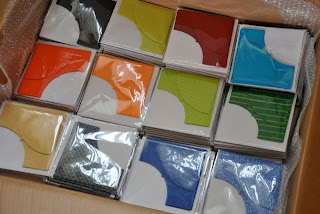 Well you'd think with 4 kids knocking around one of them would have leapt at the chance to earn a few bob but NO the miserable bunch had better things to do like sit GCSE's and A'levels for 2 of them. The little-one was too busy donning a jacket and dickie-bow to  play Dr Who (again)  and the other has been too busy teaching his son to crawl (7 months old and crawling - amazing - what a proud Nanny I am) 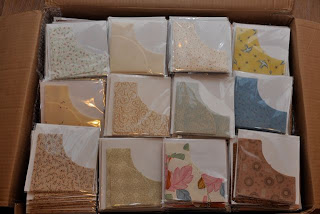 So it was down to me.

So with over 5000 pieces cut, stacked and bagged I started packing them to post to Ireland.  I can honestly tell you my love affair with the little beauties is wearing thin but not so thin that I didn't start another version on Tuesday last week ....but this time I have hand cut some 7" versions using the BackPorch Acrylic Templates.
Posted by Tracey at 21:10