Amy over at Amy's Creative Side  is hosting a bloggers quilt festival for us poor folk that haven't been able to get to Houston this year.  I have been to Quilt Market but that was a decade ago and no doubt the event looks somewhat different to when I was there last but I did get to MQX in April this year so I can't feel to hard done by.

For Amy's festival I have decided to show something a little different. Its a small postcard I made for my cousin Emma back in Feb 2010. 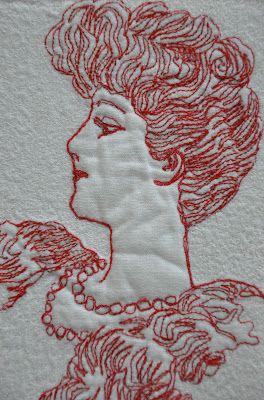 Now first up I need to explain something ... I am a longarm quilter and without being too "up myself"  I'm an OK longarmer.   BUT I brought a longarm because I could't machine quilt on a domestic machine.  I tried and failed miserably time and time again. But as soon as I had my hands on my LA it was a different matter. It was like coming home and I felt very very comfortable.  So I left domestic machine quilting well alone  ...for over 10 years in fact. But you see  I am also a Scorpio and I don't accept defeat well, so last year I decided to put things right and teach myself to machine quilt on a domestic machine. 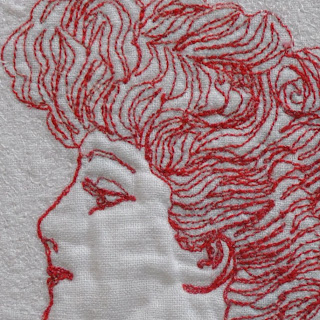 This small postcard was a small exercise I did to help me practice. It's NOT good but its not too shabby either and I was very happy enough  to make it into a postcard AND pop it in the post for all the world to see.
. More importantly though, this tiny 4" x 6" quilt  gave me the confidence to know that with practice you can achieve anything you want to.  It took me years to build up the courage to tackle domestic machine quilting again but I did tackle it !
With a  little determination, perseverance AND most important of all ...an ability to laugh off some pretty awful attempts ....I came out feeling a huge sense of accomplishment.
I haven't done too much quilting on my domestic machine since but at least I know I can if I have too!